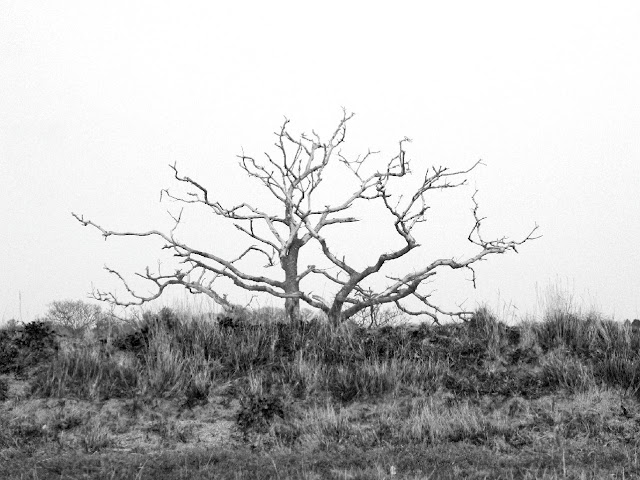 Mike Chen and Amy Marie Gladding are showing their work at the Frameworkshop & Gallery in Ipswich, 22 St Nicholas Street from June 3rd to 26th.

Forests played always a crucial role in Mike's quest for identity and orientation. Having grown up in the far West of Germany near the French border, his hometown of Augusta Teverorum, Roman name of Trier or Treves, was the capital of the West Roman empire under emperor Constantin.

The vast forests left and right of the Mosel valley were not only his playground as a child, they once were the battlefield where the Roman army met Germanic tribes on their conquest through Europe. War was a constant for the region and the strategic importance was once again utilised in the 20th century by the Nazi German dictatorship when they built their western defence line, known as Siegfried Line, stretching from the lower Rhine region down to the Switzerland border.

A formation of bunkers and observation posts were built just outside the village on a mountain peak, offering far views into the surrounding valleys of Mosel and Ruwer and overlooking Trier.

Years later Mike settled here in the East of England and learnt about historic events specific to the region, enabling him to make connections that inspired a body of work he is committed to since late 2017. Crucial to the latest contribution to his portfolio are 20th century events that defined history and shaped the future of Europa as we know it.

Prior to the consequences of Nazi Germany the mouth of the rivers Orwell and Stour has seen the surrender of the German submarine fleet at the end of WW1 in November 1918. Only twenty years later another significant arrival into the port of Harwich could be recorded when a vessel sailing from the Hook of Holland delivered 196 Jewish children from Berlin into safety after the events of the 9th November 1938, known as the Kristallnacht. The British government amended their immigration law and waived all visa requirements to allow the children to settle here in the UK. In total around 10000 children were saved from the Nazi horrors.

This humanitarian act was paralleled by the construction of the western defence line in Germany, stretching over 390 miles and incorporating more than 18000 bunkers, tunnels and tank traps.

Following his still ongoing project  SIEGFRIEDEN , that came to a hold due to the COVID pandemic, Mike produced a body of work during winter months of 2020/21 of which seven images are now on show.

Over 80 years on, having experienced the longest period of peace in Europe we still continue to witness great humanitarian efforts paralleled by events inflicting on human rights and freedom.  Brexit, the rise of populism, a dictatorship just outside the eastern borders of the EU, but as well the military coup in Myanmar, the abuse of police powers, BLM and many other demonstrations for equality and freedom across the world.

"Ancient trees are precious. There is little else on Earth that plays host to such a rich community of life within a single living organism." - Sir David Attenborough

Mike's photographs draw you back in time. A dangerous journey of false romanticism or a bad reality check. "There is a softness to Mike's images that cannot be replicated with digital cameras." - Gordon Mann. The duality of events during the 1930s connected to his upbringing and his current home, made Mike use cameras manufactured in Germany between 1934 and 1938 and sold here in Britain.

The Zeiss and Schneider lenses of the time are responsible for the softness in focus and the viewing experience. "It's like a still from Cooper and Schoedsack's 1933 King Kong." - Matt Moseley

Mike hopes that this "past look" serves as a reminder and educator for the younger generation.

The seven pieces on show focus on the fragility of nature here in the East of England. But not without making a political statement and a comment towards our own vulnerability. The woods in Christchurch Park in the centre of Ipswich are important to the public as a recreational space that takes one out of the urban setting and its negative effects on wellbeing.

Having access to such wonderful nature we take for granted and only realising through lockdown how important such recreational spaces are. Not many will be aware that the public only got access to Christchurch Park in 1848. In fact, Thomas Fonnereau in 1772 tried to introduce keys for those who would sign an agreement with conditions of entry so he could restrict public access. (source: Ipswich Borough Council History of Christchurch Park )

In his other works Mike depicts the fragile cliffs along the Orwell banks near Levington and two different wetlands that can be found in Suffolk. Natural erosion and habitat are furthermore impacted on by human interaction. According to a BBC investigation in 2014, the Orwell estuary was the worst performing estuary in Britain when it came to birds. ( Bombarded Birds )

Since 2008, long before the current fashionable trend amongst practitioners, Mike started experimenting with alternative processing methods to reduce the environmental impact of the photographic process. His ingredients he purchases from small local businesses and they are nothing else than what you would expect to find in an average household. Coffee, vinegar, vitamin C, washing soda. And a bit of Nothsea water.

His digitisation process relies on second hand products, often more than 20 years old. This sustainable aspect in his working process was present from the start of his photographic endeavours. Initially from an economic decision that he could only use gear that was passed down to him by his father. But then he realised the capitalist cycle of renewing consumer products and it became an obsession to increase the longevity of mechanical equipment including early digital apparatuses.

Mike prints his work in his studio, using a resin free true baryta paper in museum heritage quality. The inks are guaranteed light stable for 100 years. Of course only the future can verify this. The prints sit in bespoke mounts made by local frame maker Robin Peters and the frames have been handmade by his friend Tim Hetherington some 30 years ago.

Profits from the image sale go towards the Ginnel Foto Community and support the gallery with a fair percentage.